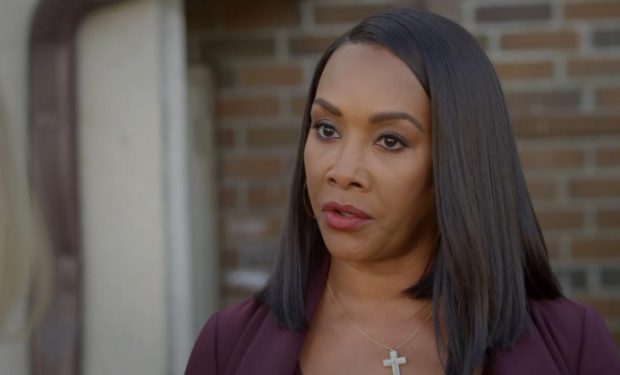 Vivica A Fox in The Wrong Stepmother on Lifetime

In the Lifetime movie The Wrong Stepmother: Mother’s Day, actress Vivica A. Fox plays school guidance counselor Ms. Price. When a pretty blond woman named Maddie (Cindy Busby) shows up at the school and announces that she’s there to pick up Nicole Stone (McKinley Blehm), Ms. Price does not greet her warmly.

“I know who you are,” Ms. Price says. “You’re not a role model and you’re hardly a mother. Based on what I’ve seen, you’re the wrong stepmother.” Bam!

Fox has been busy promoting the Wrong Summer Vacation series of Lifetime movies which includes The Wrong Tutor, The Wrong Boy Next Door and The Wrong Mommy. She looks amazing in a bright yellow double-breasted suit.

In real life, Fox has said that not having children is “the biggest regret in my life.” In a 2014 interview with Oprah Winfrey, below, Fox recalls a time when she saw Halle Berry on the red carpet with her young daughter and says, “I won’t be able to see my eyes in a child, and that’s something I’ll miss.”

The Wrong Stepmother: Mother’s Day premieres on Lifetime on Thursday, July 11 at 8 pm.