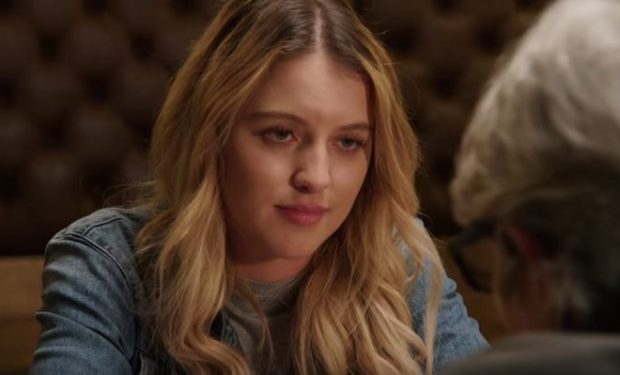 Appel in Stalked by My Doctor: A Sleepwalkers Nightmare on Lifetime

Oscar-nominated actor Eric Roberts (father of Emma Roberts, big brother of Julia Roberts) reprises his role as creepy Dr. Albert Beck in the 2019 Lifetime movie Stalked by My Doctor: A Sleepwalker’s Nightmare. This time, Beck has stolen the identity of Dr. Tanner who works at a sleep clinic. When Beck/Tanner meets his first patient, a gorgeous blond (Emilie Ullerup), and discovers she suffers from sexsomnia, he thinks he hit the jackpot.

Appel has close to 60,000 followers on Instagram thanks to the plethora of her sexy bikini photos (and video including the one below under a waterfall in Costa Rica…)

The 25-year-old dancer and actress Appel launched her acting career in 2012 when she landed the role as a mob dancer in the movie Step Up Revolution. She has since then appeared on Shameless (Brina), and The Fosters (dancer Ari), among other TV series. Check out Appel doing The Starbucks Shuffle with Todrick below!

Stalked by My Doctor: A Sleepwalker’s Nightmare premieres on Lifetime on Saturday, July 13 at 8 pm.