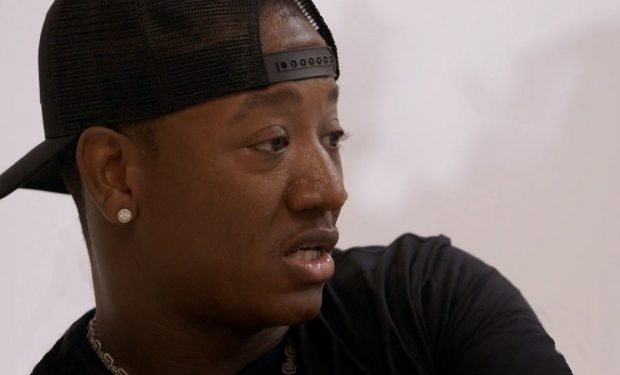 Yung Joc at the salon, LHH ATL on VH1

On the Love & Hip Hop Atlanta episode “Put It On Your Mama,” the light shines bright on rapper Yung Joc who’s been accused of cheating — and right before he plans to propose to Kendra. Sick and tired of people (“miserable-ass women”) interfering in his relationship, Joc calls the ladies into Salon Eshelon to find out who told Kendra he was cheating on her with his stylists. Kendra won’t accept Joc’s phone calls or text him back.

At the salon, Shekinah is the first to speak up, admitting: “I said some things.” Shekinah said she told Joc’s ex Karlie that Joc was flirting with her one day. Karlie says, “I don’t even have Kendra’s number.” Joc’s other ex-girlfriend Sina jumps in and says, “What you told Karlie, Karlie told me and I told Kendra.” Sharonda, the salon manager, says she told Kendra Joc flirts with the stylists, too.

Joc stands up and starts yelling at everyone and before walking out, he picks up a table and throws it. Love & Hip Hop Atlanta airs Mondays at 8 pm on VH1, right before Scream: The TV Series. [Watch It Again: Stream VH1 shows anytime — VH1 app is free]