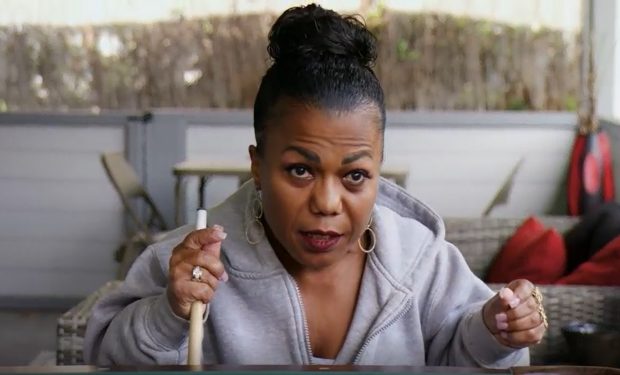 On the Little Women: LA episode “Social Media Intervention,” while Christy Gibel tries to help her husband Todd qualify for a surgery that will drastically help his mobility, Terra Jole gathers the girls for a social media intervention for Tonya Banks.

After the intervention, Tonya vents to her ex/business partner Jaa. “These heifers had the audacity to pop up at my house” to talk to her about “all the videos you and I have been doing.” Tonya tells Jaa that they called the videos “half-assed” and “tore all the videos we done from a to z.” Jaa tells Tonya, “They not the boss.” Tonya says, “Those videos represent me. So you’re tearing me down as a person.”

Jaa encourages Tonya by saying, “You’re a creative genius.” Tonya is still mad. “Those heifers came in shooting bullets.” She added, “You didn’t even give me a chance to put on a bullet-proof vest.” She was definitely caught off-guard. “I thought these heifers were coming to talk to me about my relationship with Jaa.”

When Tonya reports that the “heifers” offered to help Tonya make a new video, she suggested that Jaa be there “because you know my vision.” He hems and haws. Jaa says, “I don’t think it’s about your videos, I think it’s about you working with me. Frustrated with the idea, Tonya says, “It’s like I’m just one step from literally going off on all of them.”