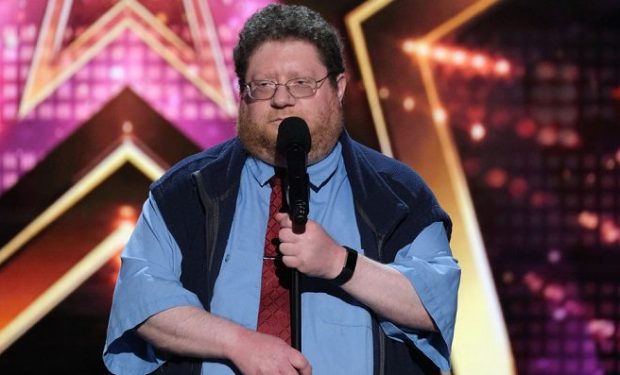 Country music superstar Brad Paisley joins the judges on America’s Got Talent as they narrow down the field of contestants during Judge Cuts. One of the contestants who hopes to advance is 49-year-old unemployed stand-up comedian Kevin Schwartz from Madison, Wisconsin.

Although he suffers from crippling anxiety and agoraphobia, Schwartz manages to deliver one-liners on stage that might remind some of the legendary, lethargic comedian Steven Wright, who is known for his deadpan delivery.

During his AGT audition, Schwartz delivered this beauty: “I used to have a problem with grammatical tenses (insert pregnant pause), but, not yet.” One of Wright’s most famous lines is: “I intend to live forever. So far, so good.“

Another comparison: Schwartz delivered: “I don’t always cry myself to sleep (pause), I have insomnia.” Wright’s joke: “Last night I stayed up late playing poker with Tarot cards. I got a full house and four people died.” It’s the droll deliver, of course. But the content similarities are there too. Wright once bought a microwave fireplace — you can “sit in front of it for the whole night in eight minutes.” Schwartz has three minutes to convince America (and the AGT judges) that he’s can light it up!