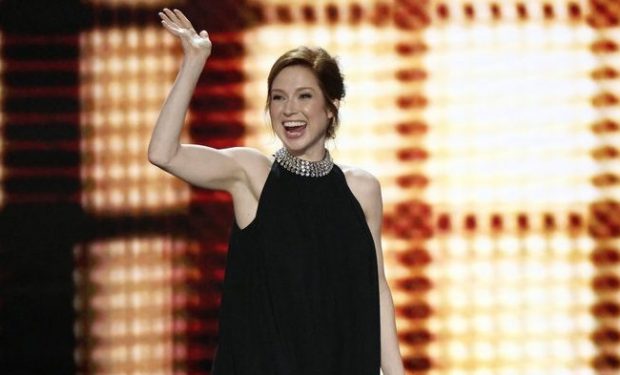 For the second round of America’s Got Talent Judge Cuts, judge Gabrielle Union’s husband, former NBA basketball player Dwyane Wade, was the guest judge. He’s so tall compared to the other judges (he’s 6’4″) the stage hands lowered his judge chair.

For the third round of Judge Cuts, comedic actress Ellie Kemper, star of Netflix’s Unbreakable Kimmy Schmidt, is the guest judge. Kemper, who is 5’5″ tall, doesn’t need her chair lowered… but she does need it to be fixed!

While watching the amazing singer Carmen Carter perform, Kemper, who is pregnant with her second child, literally breaks her chair. She tells Patrzalek, “I broke my chair in a fit of ecstasy and I sank to the ground.”

Kemper will appear next on the big screen in the 2020 film The Stand-In, a comedy about a disaffected comedy actress and her ambitious stand-in who trade places. Kemper’s co-star is Drew Barrymore.