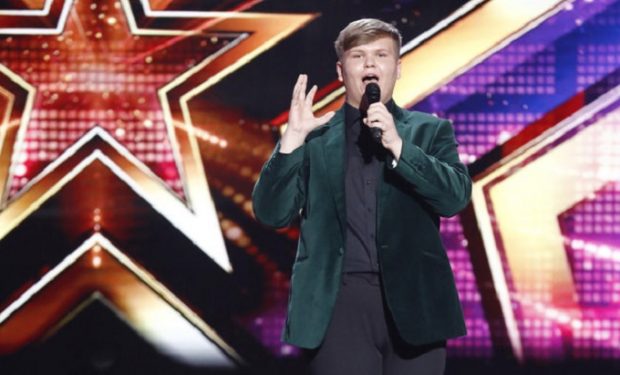 On the third round of Judge Cuts on Season 14 of America’s Got Talent, judges Simon Cowell, Julianne Hough, Gabrielle Union, Howie Mandel and guest judge Ellie Kemper are treated to a performance by young singer Jacob Norton. It’s not his first time on TV. One year ago, the unusually deep voiced jazz singer auditioned for The Voice Kids UK.

On The Voice Kids UK, Jacob got all three judges to turn their chairs. After singing Puttin’ On the Ritz, Jacob chose Danny Jones (lead singer and guitarist for the British band McFly) as his coach — over British pop star Pixie Lott and American will.i.am (formerly of The Black Eyed Peas).

Jacob said The Voice Kids UK “was one of the best experiences on my life!’ but that was before he made it to America’s Got Talent, which airs Tuesdays at 8 pm on NBC. [BONUS: Stream any NBC show watch LIVE on any device with NBC UNIVERSAL app available here. Download is FREE.]