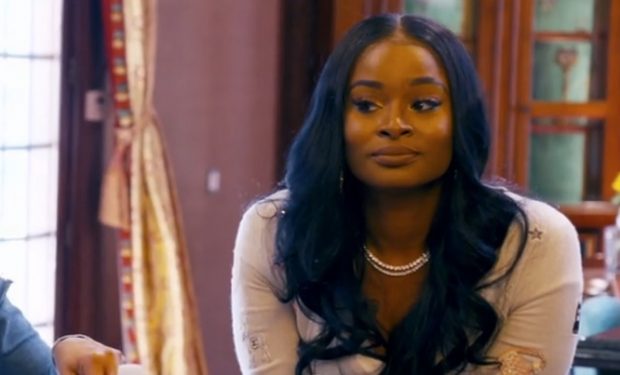 Dominique on Basketball Wives on VH1

On Basketball Wives, Shaunie O’Neal invites all the ladies to a group getaway in San Diego. And they all show up even though Evelyn refuses to go to dinner with Jennifer Williams, and Malaysia Pargo would rather not go to dinner with OG.

The tension in the house is thick. Jen brings her friend, Dominique Lenard, with her to San Diego. If you missed the previous episode, Dominique had a lot to say about the fight between Jen and Evelyn. (Jen allegedly criticized the way Evelyn raised her daughter Shaniece Hairston.)

While in the San Diego vacation house, Evelyn says to the camera, “It’s like Jennifer brought this chick here to get under my skin because at the end of the day, that’s the kind of snake that she is.”

Dominique is married to retired NBA basketball player Voshon Lenard. Lenard was playing college basketball at the University of Minnesota when he was selected by the Milwaukee Bucks in the 1994 NBA Draft. But he later opted to play-out out his senior season at Minnesota. In 1996, he signed a contract with the Miami Heat led by coach Pat Riley. Lenard went on to play for the Denver Nuggets, Toronto Raptors, and the Portland Trail Blazers before he retired in 2006.

[Related: Who Is the Father of Evelyn Lozada’s Daughter Shaniece Hairston?]