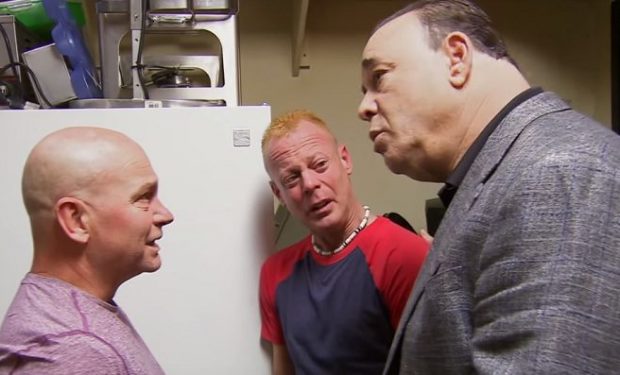 Bar Rescue: “John and Bert Bought a Bar” on Paramount

In the Bar Rescue episode “John and Bert Bought a Bar,” Jon Taffer travels to Richardson, Texas to check out Harbor Point Club & Grill. According to the show, “The two owners who have no prior experience in the bar business are on the verge of losing their one shot with Taffer unless they shape up.”

When Taffer does his recon work from his truck, from the outside he’s not sure why the bar needs help. It’s in a good location, has a decent store front, and inside they have darts and shuffle board. “Sometimes people are fake,” Taffer says. “I’m concerned that Jon and Bert aren’t being honest. Maybe this bar isn’t failing as much as they say it is. And the last thing I want to do is rescue a bar that’s faking me out.”

When Taffer tells a producer to tell the owners he’s not going to do a rescue, the cameras keep rolling to catch the two men’s reactions. They immediately choke up and when they walk into the back room, both men cry and commiserate about losing their homes. Bert suspects he’ll lose his kids.

Taffer quickly sees that it’s real and goes into the kitchen to talk to John and Bert. He doesn’t go easy on them. He reprimands them for drinking at the bar which is $400,000 in debt, and tells them, “You could’ve made this better but you didn’t.” Taffer reassures them, “If I’m going to fight for your kids, you better fight for your kids. I’m not going to fight harder than you.” He adds: “Stop f—ing crying. We go to war now.”