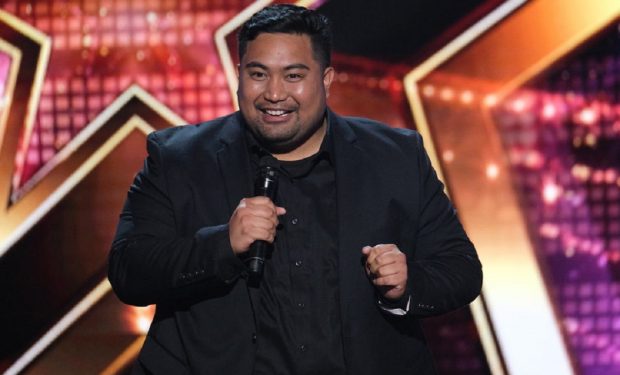 On the first night of Judge Cuts on Season 14 of America’s Got Talent, judges Simon Cowell, Gabrielle Union, Julianne Hough and Howie Mandel will be treated to another performance by singer Loki Alohikea, originally from Ewa Beach in Oahu, Hawaii. (His full AGT audition was not aired.)

Loki often shares his musical inspirations on Instagram. In the video below, he sings “Colour Me in Gold” which was written by JP Cooper. Lori says such writers “teach me to accept circumstance willingly, endure pain patiently, and love to love fearlessly.” Note: Loki’s father, whom he refers to as “the musical genius in our family,” passed when Loki was six years old.
⁣

In December, Lori revealed that “Who Would Imagine a King” by Whitney Houston (from The Preacher’s Wife) is his all-time favorite Christmas song. “Not only is the melody and message soothing and powerful at the same time, but the emotional strings it plucks stirs up memories of my late Tina (“mother” in Samoan). I don’t talk about her often, but she raised me after my father passed away. I don’t call her my aunt, because she’s more than that to me!” Listen below.

More about his Auntie…

According to Loki’s Facebook account, he’s studying Chemistry at Brigham Young University in Provo, Utah, and has done research on Alzheimer’s disease while being funded ($70K) from the National Institutes of Health! He also hopes to pick-up a second major in Commercial Music, so he can become a producer. Americas Got Talent airs Tuesdays at 8 pm on NBC.