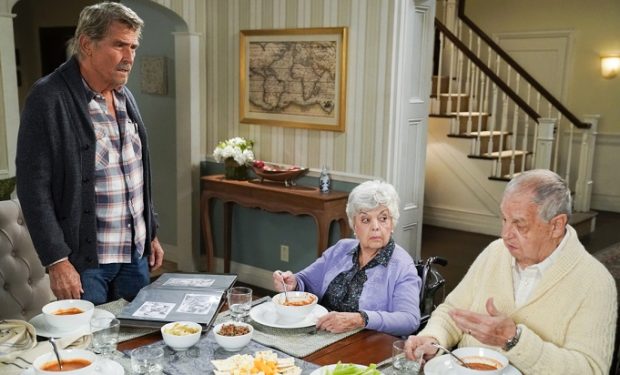 In the Life in Pieces episode “Letter Promise Adult Seventy,” Matt (Thomas Sadoski) and Colleen (Angelique Cabral) treat Jen (Zoe Lister-Jones) and Greg (Colin Hanks) to a fancy dinner as a “thank you” for writing a recommendation letter. Meanwhile John (James Brolin) finds out his mother Betty (Carol Herman) is leaving his father Mort and filing for divorce.

John’s mother Betty is portrayed by Carol Herman. His father Mort is portrayed by Paul Dooley. If he looks very familiar, there are plenty of reasons — many listed below!

Last night I attended the kickoff event for Buster Keaton Weekend at the Hollywood Heritage Museum. Actor Paul Dooley spoke about how much Buster Keaton inspired him and he got to meet his hero while working on a TV commercial in the 1960s. I kept looking at him and thinking “Wow! He looks so familiar!” It turns out Paul Dooley was on “Alf” and “The Golden Girls”. I love both of those shows so much! Memory is a strange thing. I can’t even recall what I had for lunch today, but I remembered his character’s name on “Alf”. It was “Whizzer Deaver”. I was thrilled to meet him and pose for this photo. By the way, I still have my “Alf” doll. #pauldooleyfanclub #fellowbusterkeatonfan #alf #thegoldengirls #hollywood

The 91-year-old Dooley is known for his roles on The Kids Are Alright (Father Dunne), Desperate Housewives (Addison Prudy), Curb Your Enthusiasm (Cheryl’s father), The Practice (Judge Swackheim), and in films including Runaway Bride (Julia Roberts’s father), Sixteen Candles (Molly Ringwald’s father), Popeye (Wimpy), and Breaking Away (Dad/Papa), among many others. Life in Pieces airs Thursdays at 9 pm on CBS.