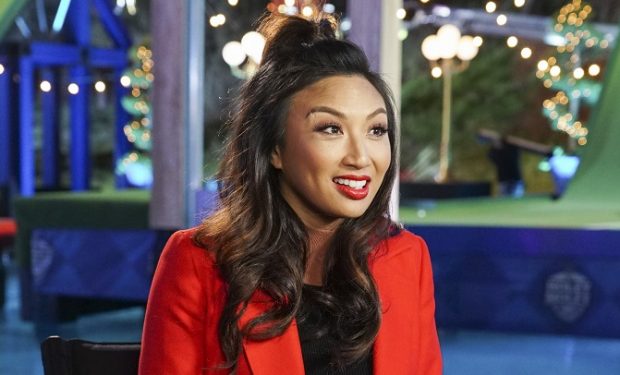 NBA champion Steph Curry is the executive producer of the latest TV game show Holey Moley. It’s a miniature golf competition set on a crazy super-sized course. Each week, 12 contestants decked out in their favorite and usually colorful golf outfits face off with their putters while funny men Rob Riggle and Joe Tessitore provide color commentary wearing their Howard Cosell inspired ABC Sports mustard-colored jackets. Jeannie Mai is the sideline reporter who interviews the contestants before and after their runs.

[Jeannie wears a cute plaid mini skirt like this one]

Mai launched her career in the entertainment industry as a makeup artist for MAC Cosmetics. Her big TV break was co-hosting MTV’s Granted with Malcolm in the Middle star Frankie Muniz. She went on to host the Miss Universe pageant and was a fashion consultant on TV shows including The Biggest Loser, among others.

On a personal note, Mai recently (2018) divorced her husband of ten years, Freddy Harteis. So, yes, she’s single! Holey Moley airs Thursdays at 8 pm on ABC, right before the other new TV competition series Family Food Fight, where families take on a series of cooking challenges.