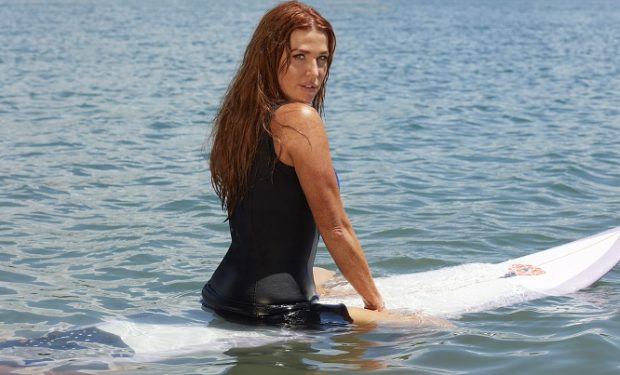 Australian-born actress Poppy Montgomery is back on TV and starring in a sexy new action series called Reef Break. She plays Cat Chambers, a thief-turned-fixer for the governor of a stunning and seductive Pacific Island paradise.

In the pilot, Cat (who also surfs, of course) searches land and sea to find the gorgeous daughter (Aussie Melina Vidler) of the island’s most prominent resident. Hint: Oscar-winning Marcia Gay Harden plays a very wealthy woman who wears Chanel suits on a daily basis.

A post shared by Poppy Montgomery (@therealpoppymontgomery) on Mar 8, 2019 at 7:09pm PST

Buh bye @therealpoppymontgomery and @evegrelis & all the amazing team on #reefbreak! Thank u for taking great care of me in #australia. Swipe for Kookoobura bird hair inspiration.

Much of Reef Break is filmed on the famous Gold Coast of Queensland, Australia. Queensland, the northeast corner of the continent, includes the offshore Great Barrier Reef, the world’s largest coral reef system, and is bordered by the Coral Sea and Pacific Ocean. Reef Break airs Thursdays at 10 pm on ABC.