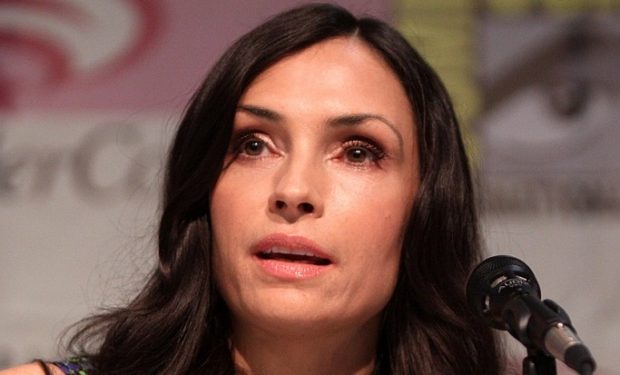 Famke Janssen, the actress who played the original Jean Grey in the first four X-Men films (from 2000 to 2014), showed support of the recently released X-Men: Dark Phoenix movie starring Sophie Turner as Grey.

Since appearing in the 2014 film X-Men: Days of Future Past, Janssen has landed memorable roles including Eve Rothlow on How To Get Away with Murder, Scottie Hargrave on The Blacklist, and Olivia Godfrey on Hemlock Grove, among others. Jenssen is currently starring in Ava DuVernay’s When They See Us on Netflix — about the five boys who were wrongfully accused of the Central Park jogger rape in 1989. Janssen plays Nancy Ryan, Assistant District Attorney who vacated the defendants’ convictions in 2002.

Janssen is a hot, sough-after star. She will appear next on the big screen in the action film Primal with Nicolas Cage. It takes place on a Greek shipping freighter carrying exotic and deadly animals from the Amazon.

Janssen plays veterinarian Dr. Ellen Taylor. Cage plays the big game hunter who’s transporting the animals to a zoo. But on the ship a mercenary killer (Kevin Durand, Fred Dukes in the X-Men movies!) releases the wild (some man-eating) animals and chaos ensues. It was filmed in Puerto Rico, although delayed due to the hurricanes. Primal will hit theaters in 2020.