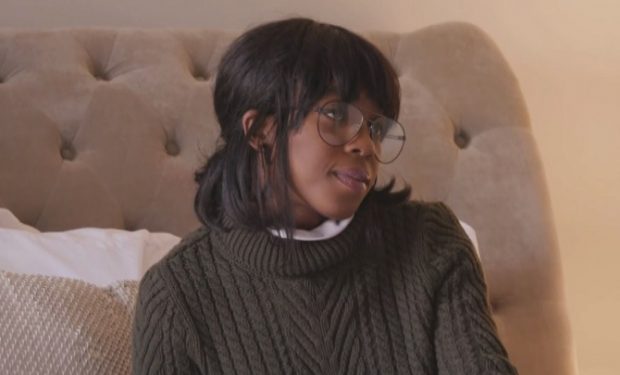 Buku on Growing Up Hip Hop ATL (WE)

Meanwhile, Andrea “Drea” Lee continues her child support battle against her ex-husband R. Kelly. The R&B singer Kelly is currently awaiting trial in Chicago after being charged with sexually abusing four females, three of whom would have been underage at the time of the alleged crimes. On Growing Up Hip Hop Atlanta, Drea and her (and Kelly’s) three children — Buku Abi (born Joann Lee Kelly), Kyd, and Jaah — move back to Atlanta.

According to WE, “Drea’s sweet daughter Buku takes a step out on her own, trying to establish herself as a vocal artist in her own right away from the long shadow of her criminal father.” One week before her debut on GUHH ATL, Buku shared a video of herself singing her new single ‘Don’t Call Me’ at a house party. Swipe to see video above. For the performance, she wore a white t-shirt under a satiny robe. She writes: “Music literally saved my life.” Growing Up Hip Hop Atlanta airs Thursdays at 9 pm on WE.