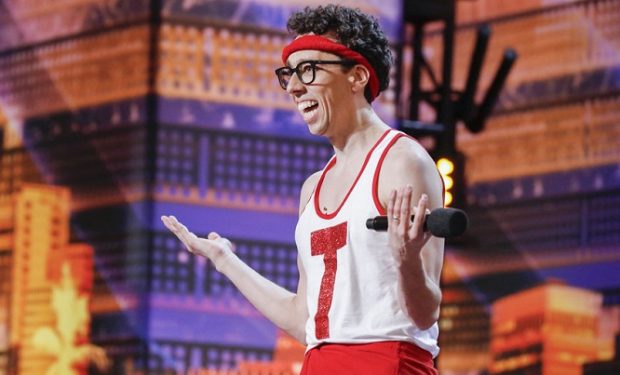 The competition on Season 14 of America’s Got Talent is stiff. Especially for stand-up comedians. Miss Jackie Fabulous won the hearts of the judges – Simon Cowell, Howie Mandel, and rookies Julianne Hough and Gabrielle Union by telling a lot of fat jokes. Comedian Ryan Niemiller, who was born with a disability in both arms, refers to himself as “The Cripple Threat of Comedy.” And then there’s the super flexible comedian Jonathan Burns, who’s already famous in our book. He’s appeared on TV for Letterman, Leno, and James Corden.

At the bar on The Late Late Show with James Corden, Burns takes off his underwear without taking off his pants. And yes, Corden is blown away. If Burns doesn’t charm the socks (at least) off America, the country has completely lost its ability to judge what’s good in the world. America’s Got Talent airs Tuesdays at 8 pm on NBC.

I take my underpants off just like you… I think? Full clip at http://youtu.be/zsXg3Ux8Mdo

Check out his full impressive reel…