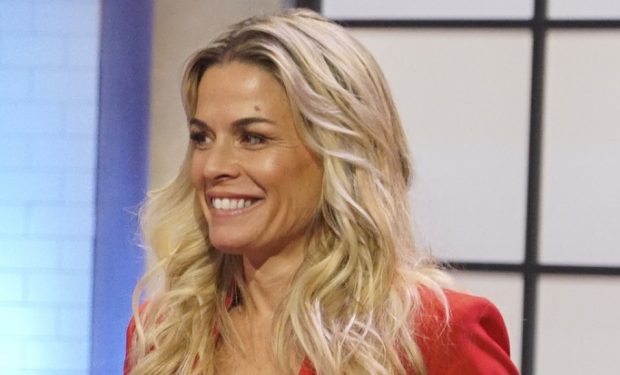 While NBA champ Steph Curry launches his TV game show Holey Moley set on a gigantic miniature golf course, his wife Ayesha Curry launches her new show Family Food Fight. On Ayesha’s show, four families face-off while taking on a series of cooking challenges including a six-course family feast. Ayesha Curry is one of the three celebrities on the judging panel. The other two are celeb chefs: “Top Chef” Graham Elliot and “Iron Chef” Cat Cora.

[One of Cat Cora’s bestselling cookbooks]

Chef Cora has four sons with ex-wife Jennifer. Each woman was impregnated via in vitro fertilization with the same sperm donor and two of the other’s fertilized ova. After being together for 17 years, Cora and Jennifer divorced in 2015 (they married in 2013). In April 2018, Cora married TV producer Nicole Ehrlich, who has two sons. That makes Cora mom to a total of 6 sons! Must help to be a great cook.

Our hearts are so full of love today 💕 Thank you to all the strong and beautiful women who raised us, and taught us to lead lives filled with love and joy. Missing my mom like crazy today, but her memory lives on in each of us💕 Thank you to our incredible sons for giving us an amazing Mother’s Day. #HappyMothersDay