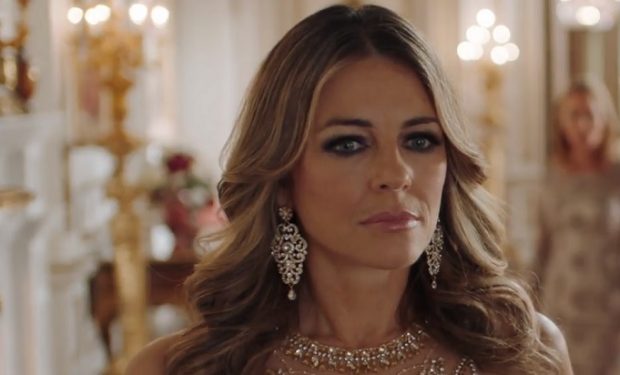 Elizabeth Hurley on The Royals (E!)

English actress Elizabeth Hurley (The Royals) turned 54 years old this week although you wouldn’t know it by looking at her bikini body. She’s been posting photos of herself wearing her Elizabeth Hurley swimwear collection. Below is a video of her in a pool modeling the Crystalline Bikini ($198). At the end of the video, she stands underneath a water fountain and smiles as she lets the water splash on her bosom. There’s no other (decent) way to describe it.

Jesus, I hope I look half as good at 40 as Elizabeth Hurley does at 53. I mean, I already have the tits… —— #Repost @elizabethhurley1 ・・・ @anandainthehimalayas @elizabethhurleybeach #crystallinebikini 💗

You’d think this was her favorite suit of the season but no, Hurley says it’s this one, the Minka…

Hurley will appear next on the big screen in a film starring and written by former TV talk show host Kathie Lee Gifford, Then Came You. It’s a romantic comedy co-starring stand-up comedian Craig Ferguson.