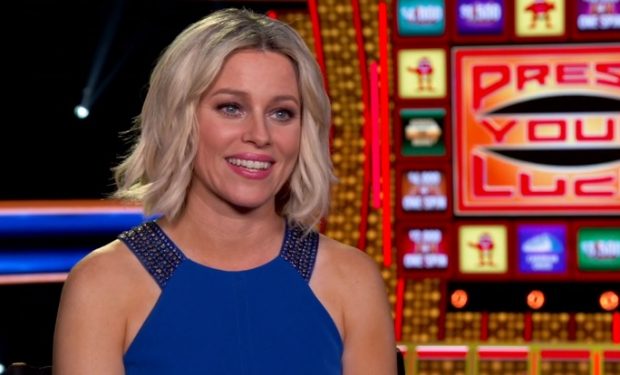 Elizabeth Banks, host of Press Your Luck on ABC

The iconic TV game show from the early 1980s Press Your Luck is back and with a gorgeous Hollywood actress as host – Elizabeth Banks. It’s a game of chance. Contestants press a button to spin and win cash and prizes but if they press the button and land on the Whammy (a devilish looking creature), they lose the round.

[An everyday version of Banks’ jumpsuit, $91]

Banks’ next big Hollywood project is the reboot of the Charlie’s Angels movie (2000) which she co-wrote and is directing. Naomi Scott (Aladdin), Kristen Stewart (The Twilight Saga) and Ella Balinska (Hunted) star with Patrick Stewart as Bosley. Banks provides the voice of unseen boss Charlie. In theaters November 2019.

Press Your Luck airs Tuesdays at 10 pm on ABC, right after The Bachelorette.

Banks on why she’s hosting Press Your Luck…

Hung out with Senator @kamalaharris And yes, that’s @officialjoshholloway in the BG (man I loved #Lost) Fun night thank you to the incredible hosts