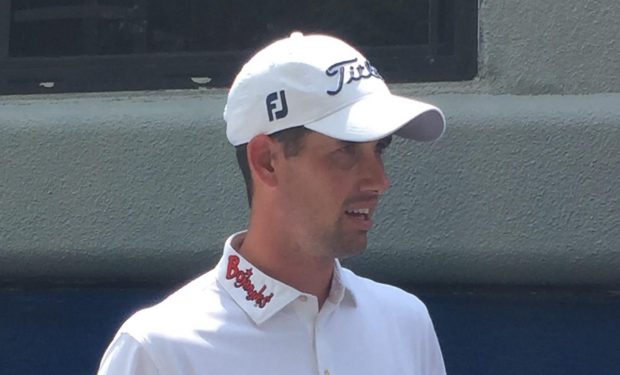 On the second day of the U.S. Open at Pebble Beach, 6’4” pro golfer Chesson Hadley is on the leaderboard. The 31-year-old from Raleigh, North Carolina turned professional in 2010. His first PGA Tour win was at the Puerto Rico Open at the Trump International course in 2014. He shot a tournament record 21-under and earned $630,000. That year, he won the PGA Tour Rookie of the Year.

‪Been working out this offseason to get stronger and to have more energy at the end of rounds/tournaments/season. I could barely mount the ball when I first started. Now I can make swings on it! I know, I’m incredibly strong. #specimen‬

Hadley, who is naturally left-handed but plays right-handed, shared a video of himself working out. He’s kneeling on an exercise ball, taking swings. “I could barely mount the ball when I first started. Now I can make swings on it!” he reports. Looks like all that work to get stronger and to have more energy ta the end of rounds is paying off.