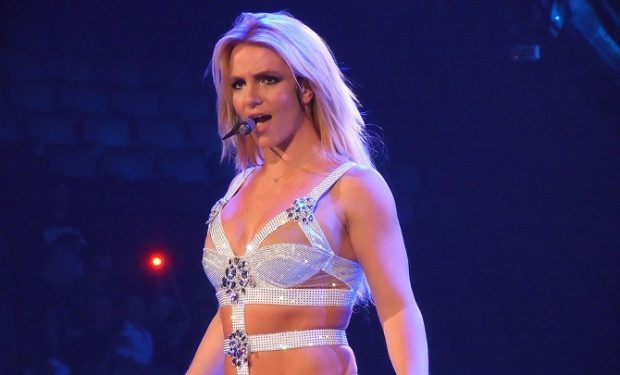 The one and only Britney Spears (photo: hnkkk via Wikimedia Commons)

Pop superstar Britney Spears is all positivity and light in her latest workout video. Spears is sharing facts about her body — and exercising, so to speak, a great deal of body positivity too. She says she knows she doesn’t “look perfect” but, she says, she’s working on it. (Her fans, in the comments, very much disagree — they seem to think she looks fantastic and, yes, perfect.)

I’ve been working really hard to loose weight …. and for me 3 pounds is like 7 pounds it’s a lot. I don’t like doing too much cardio. My body has muscle memory, cus I use it be gymnast and I can bulk up …. so I like isolated movement. The key to my workout is repetition, but that gets boring so I have a booklet I’ve made with all my favorite exercises. I usually wear headphones …. music takes me away . I know I don’t look perfect here, but I’m working on it. Hopefully one day I can give my boyfriend’s abs a run for their money !!!!

Spears shared some very personal facts about her particular body and body type. It’s “really hard” for her to lose weight, she confesses, and that’s what she’s trying to do. Losing 3 pounds, for her, is like losing 7 pounds, she says — “it’s a lot.” Spears talks about her body having “muscle memory” from her days as a gymnast, and that she’s quick to “bulk up.”

To get her workout in without bulking up, she favors isolated movement. Repetition, she says, is key — and she alleviates the boredom of repetition by doing more, different exercises which she keeps nearby in a booklet.

This is called a needle in dance. I couldn’t do it at 8 but I can now…. who would have thunk it ??

But despite the sunny take on things, Spears’s latest posts concerned so much with weight loss and body image have some fans worried for her. Here are a few of the kind of comments where the fans express concern: