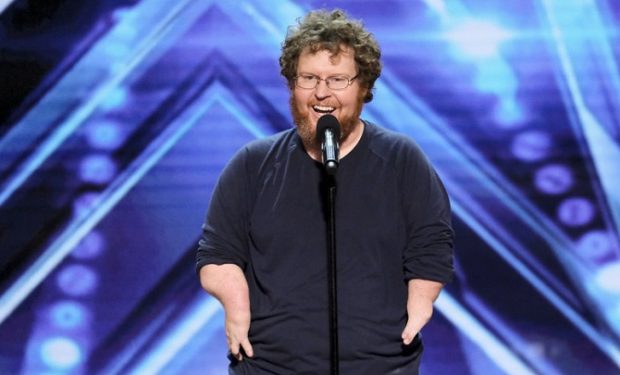 On the Season 14 premiere of America’s Got Talent, stand-up comedian Jackie Fabulous won the hearts of the judges – Simon Cowell, Howie Mandel, and rookies Julianne Hough and Gabrielle Union. She makes a lot of fat jokes and she’s not sorry. On the second night of auditions, comedian Ryan Niemiller, who was born with a disability in both arms, makes jokes about the everyday challenges he faces.

Or, as he puts it, he “hopes to prove to the comedy world that he may be unarmed, but he is dangerous.” Niemiller refers to himself as The Cripple Threat of Comedy.

Several stand-up comedians with disabilities have competed and done well on America’s Got Talent including last season’s Samuel J. Comroe who has Tourette’s. Since the upgraded format in Season 10, Comroe advanced farther than any act who relied on the Dunkin Save in either the Quarterfinals or Semifinals. He ultimately came in fourth place. In September 2018, Niemiller and Comroe both performed at The Strand Theatre in Shelbyville, Indiana (see photo below).

It got very handsome in Shelbyville tonight. @samueljcomroe is a beast and @catnipcomedy is a treat. Easy night of work.

Season 10 runner-up Drew Lynch, who developed a vocal stutter after a baseball accident, also advanced far on America’s Got Talent. But don’t ask Comroe what he thinks about Lynch. Comroe said Lynch “threw me to the side,” when he got on AGT. America’s Got Talent airs Tuesdays at 8 pm on NBC.