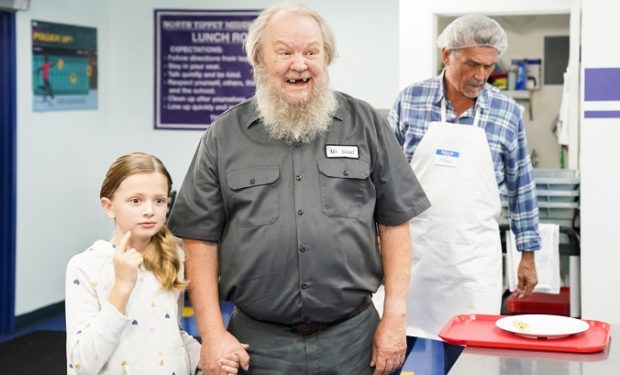 In the Life In Pieces episode “Recovery Discipline Psycho Labor” while Heather (Betsy Brandt) pushes her husband Tim (Dan Bakkedahl) and mother Joan (Dianne Wiest) to go for walks together after recovering from their health issues, John (James Brolin) befriends the janitor at Sophia’s (Giselle Eisenberg) school, Mr. Sissel. John learns that Sophia and her friends believe a childish rumor about him.

Mr. Sissel is portrayed by actor Biff Wiff. He is known for his roles on Speechless (Farmer), Grace and Frankie (The Duke), Fresh Off the Boat (Bob), Westworld (Cart Driver), Brooklyn Nine-Nine (Tito), and Pretty Little Liars (Crusty), among others. Fun fact: Wiff made his acting debut as the milk man on a 1987 episode of Moonlighting with Bruce Willis and Cybil Shepard. Life In Pieces airs Thursdays at 9:30 pm on CBS.