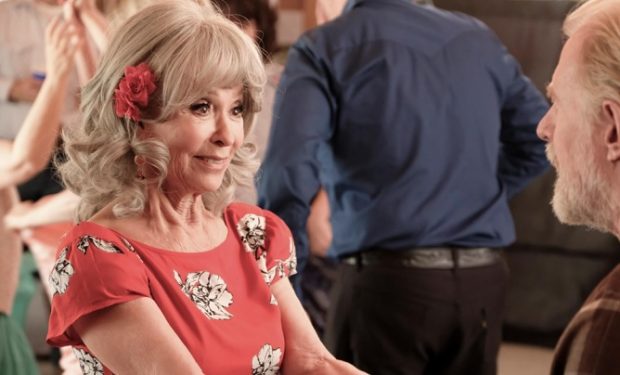 In the Season 1 finale of Bless This Mess, “The Estonian Method,” Mike (Dax Shepard) and Rio (Lake Bell) enter the “best hen” competition at the country fair. While the city slickers try to prove themselves to the community with their prized chicken Priyanka, sparks fly between Rudy (Ed Begley, Jr.) and Constance (Pam Grier). But at the country fair, Ed runs into someone from Rudy’s past, Theresa, who is portrayed by Rita Moreno.

The 87-year-old Oscar-winning actress is known for her roles on the One Day at a Time reboot (Lydia Riera), Jane the Virgin (Lilliana De La Vega), Happily Divorced (Dori Newman), Oz (Sister Peter Marie Reimondo), The Cosby Mysteries (Angie Corea), and The Electric Company (Carmela), among others.

Moreno is also well recognized for her roles in films including West Side Story (Anita, for which she won the Best Supporting Actress Oscar), Carnal Knowledge (Louise), The King and I (Tuptim), and Singin’ in the Rain (Zelda Zanders), among many others. Triple-threat Moreno is one of the few people in show business who has won Oscar, Grammy, Tony and Emmy Awards. Oh, and she was the recipient of the Presidential Medal of Freedom in 2004. Bless This Mess airs Tuesdays at 9:30 pm on ABC, right after black-ish.

West Side Story’s central premise – that love transcends prejudice and intolerance – hasn’t lost relevance since I played Anita in 1961. This story shows the power of hope and love over prejudice and intolerance, and I cannot wait to see a cast of dynamic young performers from the Hispanic community and beyond bring it to a new generation. ¡Felicidades y bienvenidos @rachelzegler, @arianadebose, @davidalvarezofficial y @joshandresrivera!