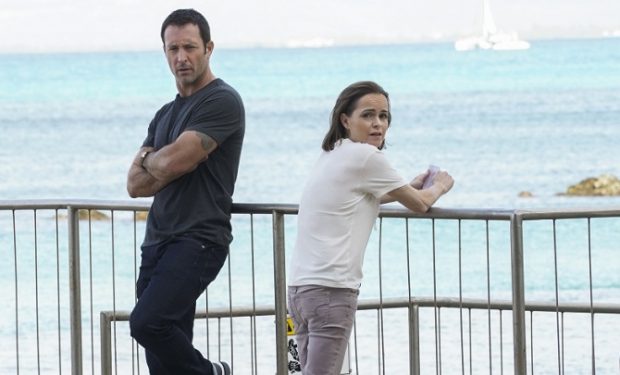 In the Hawaii Five-0 episode “Ho‘okāhi no lā o ka malihini” (translated A Stranger Only for a Day), while Five-0 investigates the murders of a ride-share driver and his passenger, McGarrett (Alex O’Loughlin) helps his visiting sister, Mary, spy on her shady neighbors. Last time we saw Mary was in the 2016 episode when their Aunt Deb (Carol Burnett) was visiting after her husband died.

[Mary wears skinny grey jeans like these by Daily/Ritual]

Mary McGarrett is portrayed by Taryn Manning. The petite 5’2” actress is known for her roles on Orange Is the New Black (Tiffany “Pennsatucky” Doggett), Sons of Anarchy (Rita “Cherry” Zambell), and in films including Redemption Road (Jackie), The Job (Joy), Hustle & Flow (Nola), Cold Mountain (Shyla), 8 Miles (Janeana), White Oleander (Niki), and Crazy/Beautiful(Maddy), among others. Hawaii Five-0 airs Fridays at 9 pm on CBS, right after MacGyver and right before Blue Bloods.

Feel yourself and be nice 🌈💕⚡️#friday #vibes