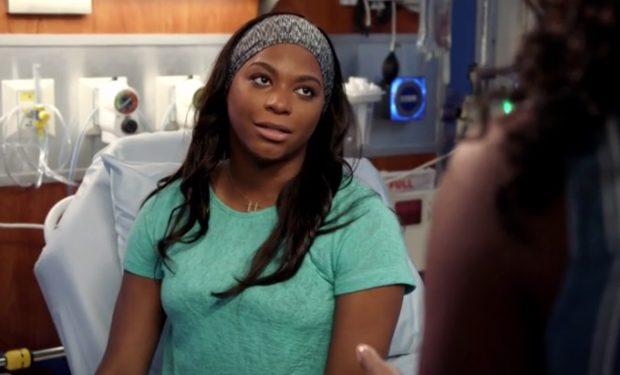 In the Chicago Med episode “Forever Hold Your Peace,” Dr. Daniel Charles (Oliver Platt) makes a life-changing grand gesture to his ex-wife Caroline (Paula Newsome) when she tells him she’s leaving town. Meanwhile, when head of ER nurse Maggie Lockwood (Marlyne Barrett) meets her sister Denise’s (Alexandra Grey) new boyfriend. The one and only other time we’ve seen Denise was on the October 2016 episode Natural History (see video below). Denise came to the hospital after an accident and was diagnosed with prostate cancer. (Denise was born a male: the doctor who did her transition surgery didn’t remove her prostrate.)

Denise Lockwood is portrayed by transgender woman Alexandra Grey. The Chicago native is known for her roles on Transparent (Elizah Edwards), Glee (Erica Lewis), Code Black (Beth), Jess Like Me (Lisa Knight), and on the mini-series When We Rise as trans activist Seville Anderson (see clip below), among others. Grey is also a musician and poet: she was selected as a semi-finalist for the 2007 International Library of Poetry. Chicago Med airs Wednesdays at 8 pm on NBC, right before Chicago Fire.