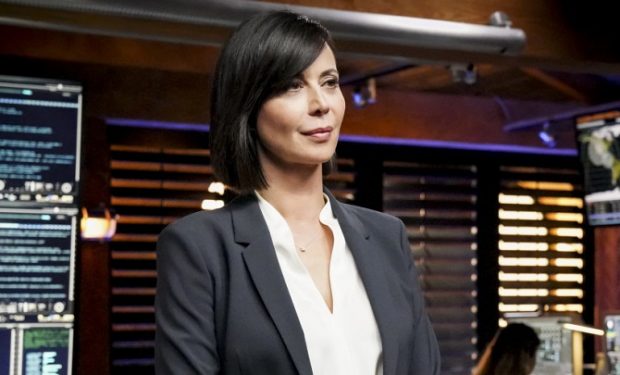 Lt. Colonel Mackenzie is portrayed by Catherine Bell. Bell is reprising the role of Mac from the TV series JAG with her former co-star Elliott — photo below. Bell is also well known for her Good Witch TV series and movie franchise on Hallmark Channel, and for her role as Denise Sherwood on Army Wives, among others. NCIS: Los Angeles airs Sundays at 10 pm on CBS.

I have such a special place in my heart for these characters…. and the show. Gonna share some history & fun facts that some of you may not know 😉 JAG was my first big “break” (after 8 years of very hard work in acting class, voice lessons, auditions… etc & “starving artist” mode!). I was literally ready to quit acting just days before I landed the role of “Mac”. Too many auditions I got “close” but not quite…. too many times having to borrow money from mom to pay the rent (THANKS MOM!) But somehow…. deep down I also knew it wasn’t time to give up! I knew that persistence and hard work/dedication DOES pay off and believing in ourselves and our dreams – and then doing the work to get there- was KEY 🌟 I surrounded myself with people who believed in me… encouraged and pushed me to dig my heels in and work even harder! After I guest starred on Season 1 of JAG on NBC, I fell in love with the show and cast & crew and Don Bellisario and I really hit it off. So when I heard @cbstv had picked up the show after NBC cancelled it, I wrote Don a note (and sent it snail mail! That was a lost art even back then!) And Don brought me in to audition for Mac. I worked HARD preparing for that audition … and for the next FIVE callbacks too (yes SIX total… ramping up to auditioning for Don & other Producer’s… then the studio … and finally the network in the theater at CBS studios WITH @djameselliott !! #nopressure 😜 But the whole time… I’d made a DECISION…. that this time I was doing it! I didn’t allow any doubt or worry or negativity enter in… just the DECISION that I was ready, and I loved this role so much that I wasn’t letting anything get in the way (one of the first times I’d done this BTW as I used to be shy and get nervous on those callbacks!!) I was ready for change and I just had so much affinity for the military… the courtroom… the planes and ships and all the toys… and the ACTION!!! And somehow…. it worked!! 🙏🏼🌟 And you guys liked me! And us!!! So thank you!! For watching! And for all the support all those years & still NOW! So blessed to be a part of it! Can’t wait for Sunday! And who knows… maybe more 😉❤️

I swear these are going out soon!! Fun seeing the photos people include to sign!! (yes that was Gemma my first baby in there- except with added padding cuz I wasn’t showing as much as we needed for the scene- who remembers the dream scene?!) You guys are the best … and those of you that write me a while ago: thank you for your patience!!!! 😮🤗 I loved twice and the boxes kept moving and being hidden away 🙁 sorry!!!! Promise I am better about it now! 🌈💃🏻💕