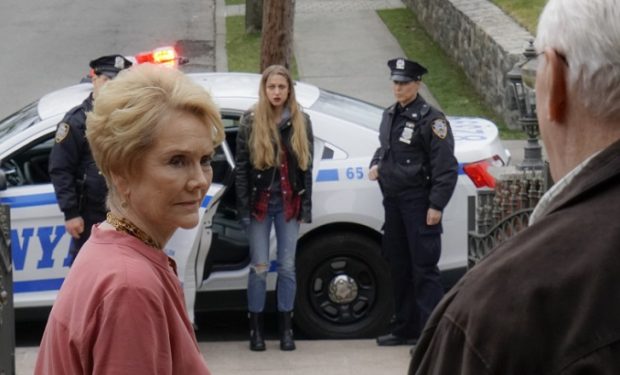 In the Blue Bloods episode “Identity,” while NYPD Detectives Danny Reagan (Donnie Wahlberg) and Baez (Marisa Ramirez) work on a murder case and Jamie (Will Estes) visits Eddie’s father, Armin Janko (William Sadler), in prison, Henry Reagan aka Gramps (Len Cariou) is waiting at home for a delivery. He’s expecting a package (Nikki’s graduation present) to be delivered. When he gets a text notifying him it’s been delivered, he opens the door but there’s no package. His grandson suggests that a porch pirate stole it. When a young woman is later apprehended outside the Reagan house, it sparks a conversation with Donna Duvall.

Donna Duvall is portrayed by Erika Slezak. The six-time Daytime Emmy Award winner is best known for her role as Viki Lord in the soap opera One Life to Live. Slezack recently made her debut on the big screen in the 2019 film Guest Artist, starring Jeff Daniels, who wrote the screenplay. Daniels plays a drunk playwright; Slezack plays his agent, Helen. See trailer below.