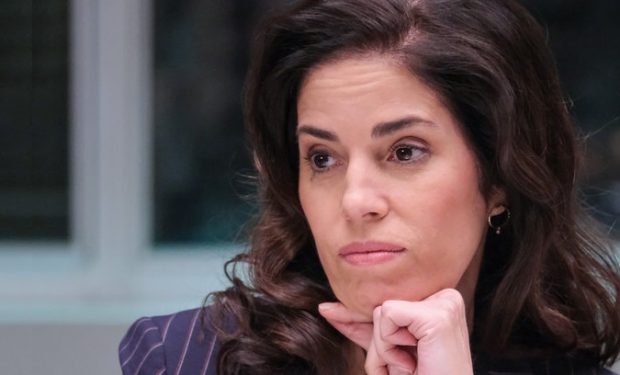 She was fired after talking about unionizing the staff and then was re-hired because that’s considered retaliation and legally considered discrimination. At corporate headquarters, Amy goes toe-to-toe with blue pin-striped suit wearing Claudia.

[Claudia wears a blue pinstripe suit like this one]

Since then, Ortiz has starred on Whiskey Cavalier (Susan Sampson), The Mindy Project(Dr. Mary Hernandez), Devious Maids (Marisol Suarez), and Hung (Lydia), among others. Superstore airs Thursdays at 8 pm on NBC.

#Repost @americaferrera (@get_repost) ・・・ Pretty sure our seat neighbors at The Hollywood Bowl last night were so over me and @therealanaortiz screaming "Go Vanessa" really loudly. But that's how our #uglybettyfamily rolls. @vanessawilliamsofficial killed it at Sondheim on Sondheim. And @jessetyler Knocked it out! Seeing my #UglyBettyFamily always makes me so happy! #familiaforever #redeyes