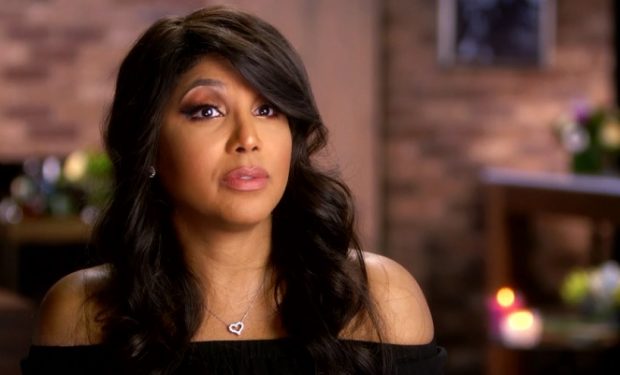 Toni on Braxton Family Values (WE)

On the Braxton Family Values episode “Grammys & Gossip,” while sister Tamar Braxton celebrates her big win on Celebrity Big Brother, Traci’s blowup with Toni’s fiance Birdman sparks drama at Toni’s Grammy dinner. After this episode was filmed, the Braxton family has been dealing with real devastation. Brother Michael Braxton’s 24-year-old daughter Lauren aka LoLo was found dead in her home in April. Her father reported her death was due to a heart condition. Since the death of her niece, Toni Braxton has posted three times on Instagram, including the photo below.

On Mother’s Day, Toni posted a video to “brag and show off” the flowers her sons Diezel and Denim had delivered to her home in Los Angeles. Toni is wearing eyeglasses, without makeup and has her hair in a black turban. When she pans the camera to the floral arrangements, you can hear the theme song of Law & Order in the background. Braxton Family Values airs Thursdays at 9 pm on WE.

My boys sent me flowers from my favorite florist @jadorelesfleurs 🌹 Mom loves you very much! @denimbraxton @diezel.braxton #HappyMothersDay 🥰