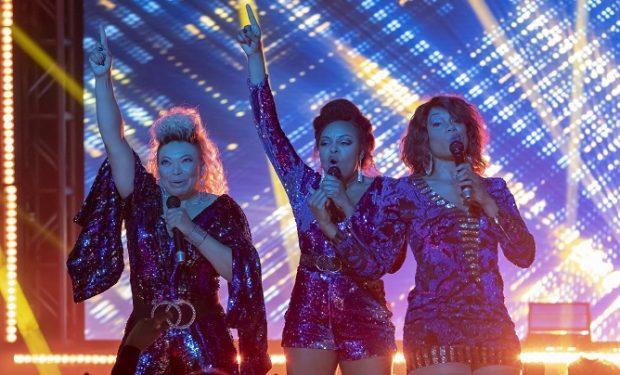 In the Season finale of Empire, “The Roughest Day,” Cookie (Taraji P. Henson) and Lucious (Terrence Howard) deal with each other’s betrayals while Andre’s (Trai Byers) life hangs in the balance. Even though the future of Empire is in jeopardy, the show must go on. The sexy R&B female trio TBD is back on stage with their signature exotic sound and tight harmonies. They are portrayed by: Opal Staples (Tasha), Tisha Campbell (Brooke), and Melanie McCullough (Denise).

[Listen to the single “I Don’t Mind”]

TBD performs the sexy song “I Don’t Mind” which includes the line, “I’ll kiss all your wounds / make you feel invincible.” The song is reminiscent of the 1990 En Vogue song “Hold On,” from their debut single from their debut album Born to Sing (see link above). When released, the song peaked at number one on the Billboard’s Hot R&B Singles and Hot Dance charts. The original En Vogue consisted of four singers: singers Terry Ellis, Dawn Robinson, Cindy Herron, and Maxine Jones. Empire airs Wednesdays at 8 pm on FOX, right before Star.