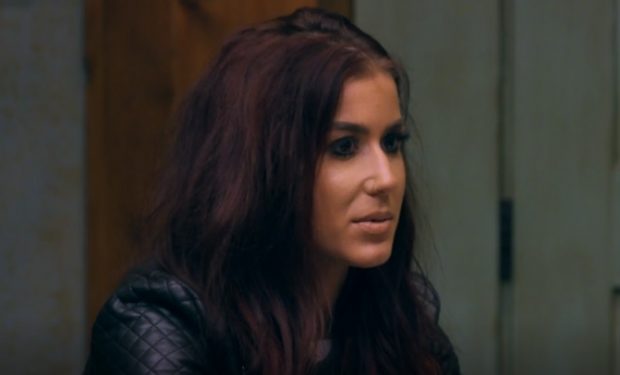 In the Teen Mom 2 episode “Family Portrait,” while Leah and Jeremy rush daughter Addie to the ER, and Briana lets DeVoin take a major step forward with Nova, Chelsea Houska DeBoer is trying to get over her panic attack. She, her husband Cole and their three kids meet Chelsea’s dad Randy, her stepmother Rita, and friend Chelsey at a restaurant for dinner. Chelsea doesn’t waste any time: she reveals the heart monitor she’s wearing on her chest. “I’ve had anxiety before but it’s never been like this before.”

[Chelsea wears a quilted leather jacket like this one]

Over dinner, Rita admits that she’s had a panic attack too. Her father says “people don’t like to talk about it because they see it as a flaw within themselves.” Chelsea says, “It’s shocking to me that this is a common thing.” She believes because her attack was “so bad” that she believes something is wrong. “I swear to god I thought I was dying.”

When her father mentions that some people say panic attacks are triggered by events, his daughter admits that a lot has happened within the past six months. She moved, she had a baby, and someone broke into her house, about which she says, “I will never get over it.” When Randy says, “The house is always going to feel a little tainted isn’t it?”, Chelsea admits to feeling “anxious right now” just talking about it. Teen Mom 2 airs Mondays at 9 pm on MTV.