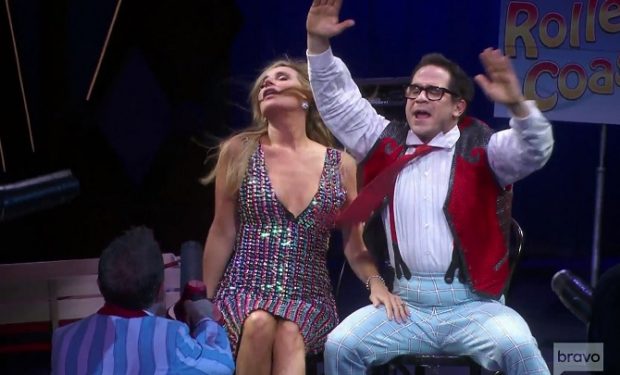 Sonja Morgan at the Big Apple Circus on RHONYC (Bravo)

In The Real Housewives of New York City episode “Tears of a Clown,” while Ramona Singer takes Barbara Kavovit shopping “to spruce up her wardrobe,” heartbroken Tinsley Mortimer makes her debut at the Big Apple Circus as guest ringleader. On the heels of her breakup with Scott, Tinsley needs a good laugh and she gets one under the big tent. When Sonja Morgan is pulled out of the audience to participate in the “roller coaster” act, Sonja doesn’t just agree to it, she goes the distance.

[Sonja wore a shiny dress like this one by Bardot, $62] 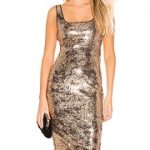 Wearing a tight, low cut sequin dress and strappy red high heels, Sonja plays along with the clown and performs two somersaults on the ground. “I love making people laugh,” Sonja says. “I may be out of practice in the bedroom but it doesn’t mean I can’t perform when it counts.” Tinsley was impressed with Sonja’s improvisation. “She killed it.” Watch Sonja get frisky one of the clowns in the video below.

Even Tinsley’s mother Dale told Sonja immediately after the performance, “I’m honestly blown away. Because I know you’re crazy, but honest to God you were fabulous.” She adds with wonder, “You have no embarrassment.” The Real Housewives of New York City airs Wednesdays at 9 pm on Bravo.