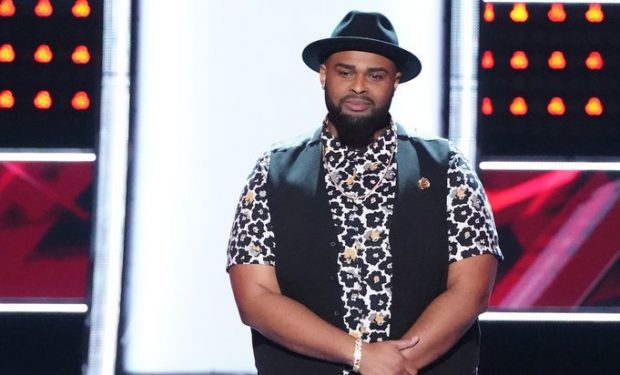 It’s down to the Top 8 on Season 15 of The Voice. Of the eight, five are on Blake Shelton’s team: Dexter Roberts, Gyth Rigdon, Kim Cherry, Carter Lloyd Horne, and Andrew Sevener. Returning champ coach Kelly Clarkson has one: Rod Stokes, and rookie coach John Legend has two: Maelyn Jarmon and Shawn Sounds, both of whom got all four coaches to turn their chairs around during their Blind Auditions. (Adam Levine doesn’t have any artists left in the competition.)

Sounds says before his audition (video below), he had a preference order for coaches: John Legend, Adam Levine, Kelly Clarkson, Blake Shelton. But he explains “However, when you’re standing there in the moment, and you have these four different people giving their spiel as to why they want you, I can honestly say that Blake was the most convincing. My entire order shifted.”

For his Top 8 semi-final performance, Sounds is singing “A Song For You,” a classic from one of his vocal idols, Donny Hathaway. It was written and originally recorded in 1970 by the late Leon Russell. Last year the song was added to Grammy Hall of Fame. Many artists have covered it since Hathaway including Cher, The Carpenters, Willie Nelson, Aretha Franklin, Donna Summer, Whitney Houston, Ray Charles, Amy Winehouse and Neil Diamond, among others. The Voice airs Mondays at 8 pm on NBC, and Tuesdays at 9 pm.