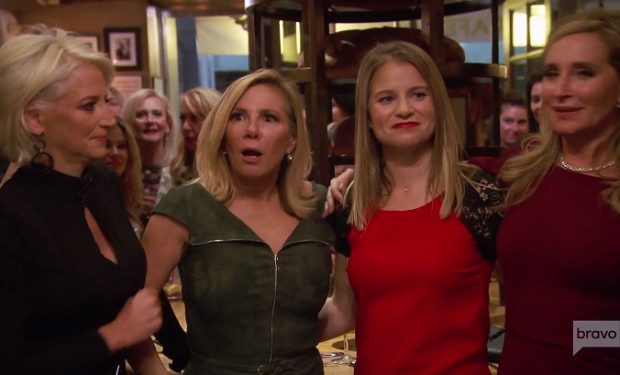 On The Real Housewives of New York City episode “Shalloween,” the drama between Luann de Lesseps and Bethenny Frankel continues when Luann learns that Queen B missed her Halloween performance. Dorinda Medley explains to Bethenny that “Luann is not obtainable to friendship right now. She’s a one-sided deal.” Meanwhile, after Dorinda moves into her new apartment, she, Ramona Singer and Sonja Morgan chair an event for the non-profit organization NY Loves Kids which fights for the rights of child sexual abuse victims. As Bravo describes it, “Proving no good deed goes unpunished, Ramona’s attempt at charity devolves into chaos.”

[Sonja wears red sandals like these by Steve Madden]

At the event, the three Housewives ask the CEO of NY Loves Kids to stand next to them as Ramona gives a speech. It starts off on the wrong foot when Ramona calls the CEO by the wrong name (it’s Bridie). Ramona soldiers on and tells everyone in the room, “everyone knows I’m all about children and women,” and then she says she’s going to cry which has Sonja burst out in laughter.

Sonja reaches over Bridie and tells Ramona, “Everyone knows you can cry on a dime.” It gets worse. When Bridie gets to speak, Dorinda interrupts her and Ramona yells at Dorinda to be quiet. They get shushed by the audience, but that doesn’t stop Dorinda from talking while Bridie tells her heartbreaking personal story. Ramona says she was “embarrassed” and “totally mortified.” The Real Housewives of New York City airs Wednesdays at 9 pm on Bravo.