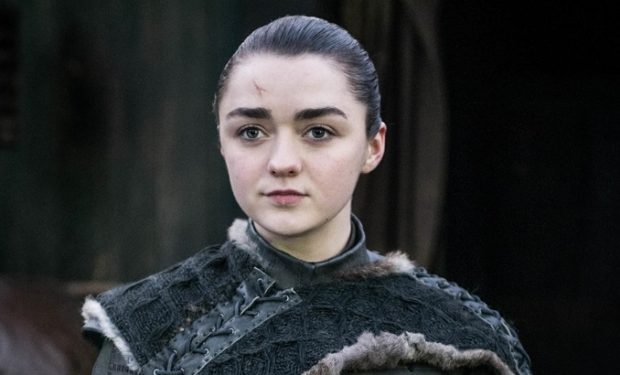 Maisie Wiliams as Arya on Game of Thrones (HBO)

After the season finale of Game of Thrones, newly blonde actress Maisie Williams (who played Arya Stark) posted photos of her modeling clothing by Parisian label M+RC Noir. In one photo she wears a black denim jacket over a black hoodie.

In another she poses in an over-sized tie-dyed green and black sweatshirt. In the M+RC Noir photo shoot, Williams appears like a regular 22-year-old young woman bopping around the city streets of London.

Williams will appear next on the big screen in the superhero horror film The New Mutants based on the Marvel Comics. It’s the 13th and final installment in the X-Men film series. Williams plays Rahne Sinclair aka Wolfsbane, “a Scottish mutant struggling to reconcile her religious beliefs with her power to turn into a wolf.” The New Mutants is set to be released in the U.S. on August 2, 2019. Trailer below.