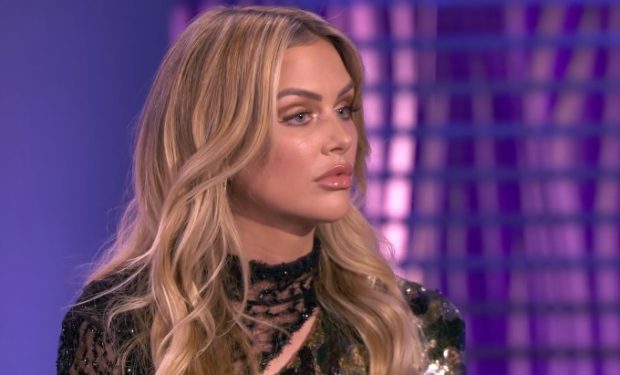 During the Season 7 reunion of Vanderpump Rules, Bravo exec and reunion host Andy Cohen reminds Lala Kent that she’s gone from 0 to 100 many times this year. He shows a montage of Lala yelling at people and then walking away. A classic line she uttered to Brittney Cartwright was “I don’t think I’m better than people but I know when I’m above someone.”

When Cohen asks Lala, who’s wearing a camouflage and leopard-lace sequinned mini dress by designer Dundas (see link below), point blank, “Why is it so hard for you to have a conversation with someone who disagrees with you without yelling at them and storming out?” She replies, “Because it’s really exhausting to school people on life.” She adds, “It’s just a waste of my time.”

Vanderpump Rules co-star Ariana Madix (who also lost her father) chimes in on the conversation and says she thinks Lala should have taken a break from the restaurant, SUR, after her dad passed. Vanderpump Rules airs Mondays at 9 pm on Bravo.

Note on Lala’s “high-octane glamour” dress: it made its debut on the runway at Paris Fashion Week and is described as being “expertly crafted in Italy with a high neck that is slashed open at an angle across the bodice, then shaped with long darts to streamline the waist.” In the video below, Lala explains why she chose that dress: “I chose a dress where it was ‘oh my gosh, that looks hot’ but if I still get ratchet it’s like ‘well, she’s wearing that dress’.”