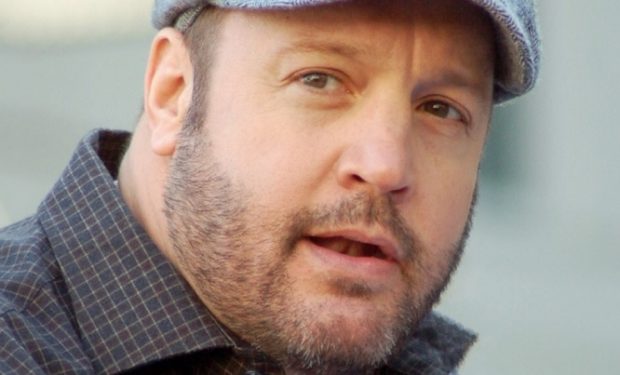 Stand-up comedian Kevin James doesn’t seem too bothered after learning that his sitcom Kevin Can Wait has been cancelled after two seasons. During Season 2, James reunited with his former TV wife actress Leah Remini from The King of Queens — she played Kevin’s ex-cop partner Vanessa on Kevin Can Wait.

While Remini says she’s “anxiously” awaiting to work with James again, James isn’t waiting for anyone or anything. He’s launching a 2019 comedy tour. And he’s promoting the show by posting hilarious short videos of him walking around with earbuds and breaking into dance.

In his most recent video (below), he’s walking around DUMBO (the neighborhood under the Brooklyn Bridge in New York) and starts gyrating against a hot dog stand to the beat of Gloria Estefan’s “Rhythm Is Gonna Get You.” Wait for the leg kick.

Gloria Estefan was right… the rhythm is gonna get ya….Providence RI! I’m coming to you… 9/22 pre-sale tomorrow @10am. Password: KJTOUR

Check out Kevin James walking across the street in Pittsburgh and dancing like he just doesn’t care in the middle of the street to the BTO rock and roll classic “Taking Care of Business.” This time James stops traffic.

Pittsburgh… this is how much fun I had… it deserves a little BTO!

In Kansas City, Kevin James kicks it up a notch and dances to Toto’s “Hold the Line”… wait for the Moonwalk.

Unbelievable time last night… Thanks Kansas City… Let’s turn it up with a little TOTO.