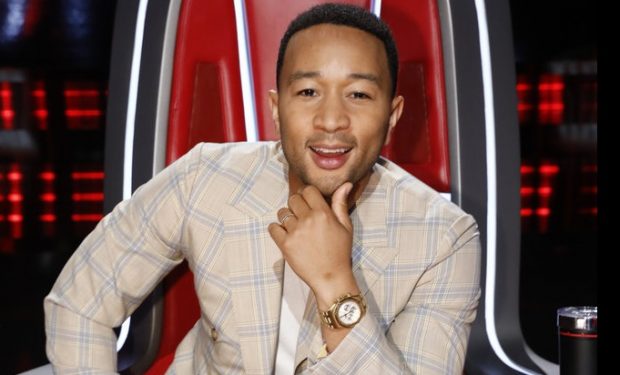 It’s down to the Top 4 finalists on Season 16 of The Voice. Three are on Blake Shelton‘s team: Gyth Rigdon, Dexter Roberts and Andrew Sevener. The one and only female finalist, Maelyn Jarmon, is on rookie coach John Legend‘s team.

Adam Levine has said on the show that Maelyn Jarmon should win. When not busy coaching Maelyn for the Final Four event on Monday, May 20 — when all four singers get to sing three more times before the winner is announced on Tuesday, May 21 — Legend spends time with his gorgeous model wife Chrissy Teigen and their two kids — daughter Luna and baby son, Miles, who just turned one.

Legend shared the photo of below of Miles on his birthday. The little man is wearing a $360 tiger print cardigan by Gucci Kids under that Cooper Pearl bicycle bandana bib.

Our beautiful boy is 1 year old today! We love you, Miles!

Miles also received a (toy) car for his birthday, which he seems to love. See video below. Happy birthday, Miles! The Voice airs Mondays at 8 pm and Tuesdays at 9 on NBC.