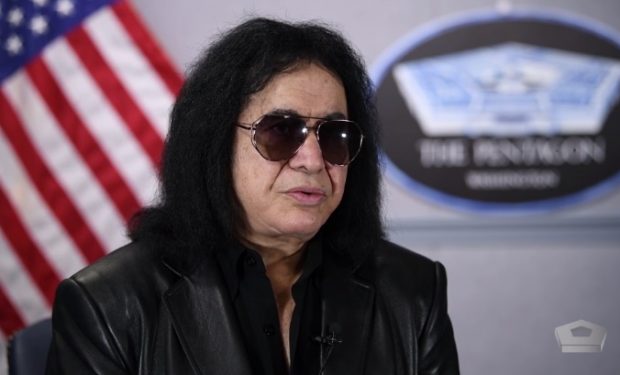 Gene Simmons, the 69-year-old Israeli-born rock star of the legendary band KISS, delivered a briefing at the Pentagon podium earlier this week. It was the second on-camera press briefing at the Department of Defense in the last year.

Scottish-born actor Gerard Butler was at the podium in October 2018 to promote his film Hunter Killer, in which Butler plays an American submarine captain who works with U.S. Navy SEALS to rescue the Russian president, who has been kidnapped by a rogue general. (We are not making this up.) In the real world, more than 65 days have passed since White House Press Secretary Sarah Huckabee Sanders has held a press briefing.

Later in the day, Simmons and his Canadian-born ex-Playboy model and exotic thriller actress wife Shannon Tweed (Playmate of the Year 1982), were photographed and filmed walking up the driveway to the White House. Simmons wore his signature black suit; Tweed wore white pants with a black silk blouse and black high heels.

Twitter: At the @whitehouse today and I just spotted the @kissonline frontman @genesimmons https://twitter.com/BrianOD_News/status/1129084968112721920

In the DoD video below, Simmons says before their encore performances at KISS concerts, they sometimes say the Pledge of Allegiance. Simmons reports that “patriotism is alive and well we just need to rekindle the fire.”