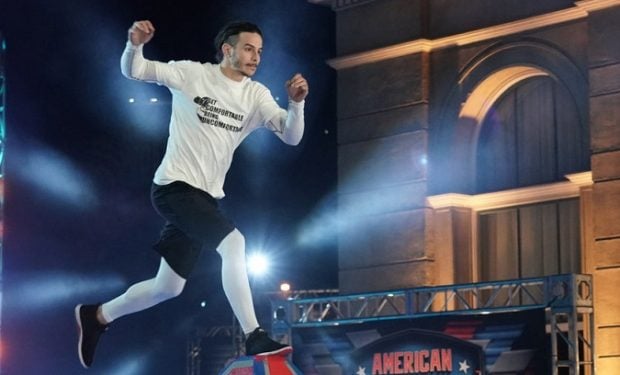 The Season 11 premiere of American Ninja Warrior kicks off with the Los Angeles Qualifying Round. There will be some new faces on the obstacle course including sideline reporter Zuri Hall, and some familiar faces including the unmasked returning competitor Flip Rodriguez.

When Flip first competed on the show as a 21-year-old (American Ninja Warrior 3), he wore what became his signature look — a face mask. At the end of Season 8, he courageously revealed that he was sexually abused as a child (from 9 to 15) and has since competed without the mask.

Hours before the Season 11 premiere, Flip posted a video of himself training in the gym with the Shinedown song “Devil” blaring. The chorus of the song includes the lyrics: “So nobody move / ‘Cause I was sent to warn you / The devil’s in the next room.”

On ANW this season, Flip is wearing a shirt that reads: “Get Comfortable Being Uncomfortable.” American Ninja Warrior airs Wednesdays at 8 pm on NBC.