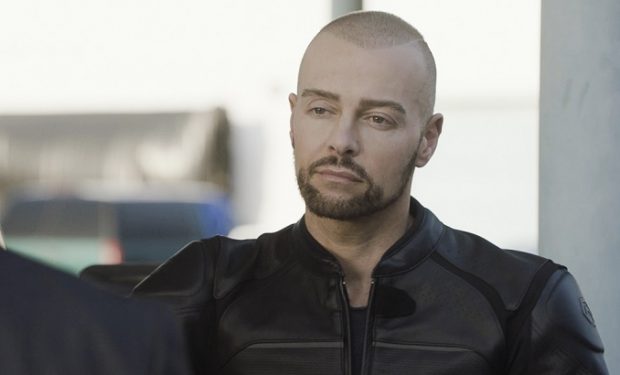 In the Season 9 finale of Hawaii Five-0, “Hana Mao ‘ole ka ua o Waianae (Endlessly Pours the Rain of Waianae),” Five-0 continues to hunt down escaped criminal Aaron Wright before he can sell cyber-weapons to the highest bidder. Aaron Wright is portrayed by former child star actor Joey Lawrence, who’s keeping in shape while filming in Hawaii and who jokes about having his own Iron Paradise gym.

Dwayne “The Rock” Johnson has built gyms in all of his homes including what’s known as The Iron Paradise at The Rock’s Miami House. See Lawrence’s selfie post below with a shout out to The Rock.

Lawrence couldn’t believe it when Johnson replied to the photo: “Keep getting after! Looking jacked brother.” Lawrence wrote the message got him “beyond stoked!” Hawaii Five-0 airs Fridays at 10 pm on CBS.

Yo yo. In #hawaii filming my next episode of #hawaiifive0 and squeezing a little time in … to Fight #fathertime at my very own #ironparadise … yup me and @therock both have our own #ironparadise …. except his travels with him and he owns it and mine is which gym or excuse for a gym the hotel I’m staying at has to offer! Lol 😂 keeping on point though for when #gotham needs me ! #batman #dc #warnerbrosstudios #manifest #blessed #pray #dream #reality love you all! 🦇🦇🦇🙏🏼🙏🏼❤️

The Rock’s reply captured by Joey…

Ok so one of the coolest ever…. the worlds real life super hero and kick ass dude @therock … told me I look “jacked” !!! Are you kidding me?!!!!!! I’m beyond stoked!! So flattered and honored for the kind words!!!!!!! Only thing better would be an opportunity to train with the man himself at the famous #ironparadise 🙏🏼!! #imready when you are @therock #letsgo #blessed #getafterit #nolimits #muchlove 👍🏼🦇

The Rock at Iron Paradise…