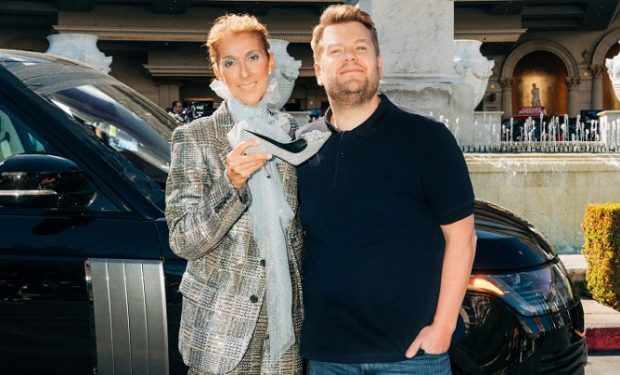 Four days before her appearance on a special Carpool Karaoke Primetime Special on The Late Late Show With James Corden, French Canadian superstar singer Céline Dion graced the cover of Elle France. In the cover photo, Celine is wearing a stunning green Alexandre Vauthier Couture dress that fits her amazingly thin body like a glove. The way the camera light hits the textured fabric, the dress appears like reptilian skin.

The headline on the Elle cover reads in French: Celine Dion, La Renaissance, with her quote “Ma Vie a Recommence a Zero le Jour de mes 50 ans.” Translated: “My life started at zero on the day of my 50th birthday.” She turned 51 in March. The last two years in her forties were extremely difficult. In January 2016, her husband of 21 years René Angélil died at the age of 73; two days later her brother Daniel died (also of cancer) at the age of 59.

Note: Celine is on the June cover of Elle USA, too – a different dress (a Valentino Haute Couture floral embroidered dress).

Dion is currently working on her 12th studio album in English, Courage, which will be released in November 2019. She will go on her 14th concert tour to promote the Courage album, beginning in Quebec City, Canada on September 18, 2019. She will perform 66 shows in North America.

When asked why she called the tour Courage, she explains in the video below because there’s a song called “Courage” on the album. “We all go through a lot of things in life. We all do. Whether it’s losing someone, whether it’s sickness, something we have to fight, something that life imposes on us. And I think I went through a lot. And life had given me the tools — my family, the way I grew up, the way I was raised – to find my inner strength, in a way, to find courage, to keep going. Carpool Karaoke Primetime Special on The Late Late Show With James Corden airs Monday, May 20 at 10 pm on CBS.