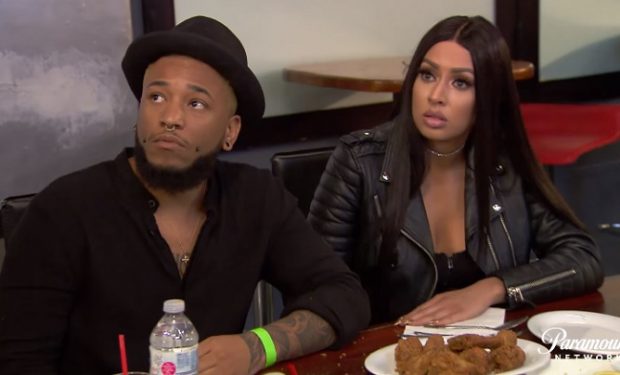 On the Bar Rescue episode “LIV’n on a Prayer,” Jon Taffer visits Liv, a bar in Las Vegas that “can’t find its identity in order to survive in the highly competitive service town of Las Vegas.” Before Taffer announces his arrival to the owner, Michelle, he sends in two people as part of his recon work. He usually sends in an expert cook and/or bartender but for this episode he sends in two social media experts who have more than one million followers.

On social media, the man is known as “Space.” The woman, his real-life girlfriend, is known on YouTube as Tyme the Infamous. She’s known for posting videos that capture her trying on sexy lingerie. She has more than 623,000 followers on YouTube.

While the social media stars wait for their drinks (a Long Island Iced Tea and Cosmopolitan), they start filming themselves and review the atmosphere. “This is absolutely disgusting,” says Space. Tyme shows the camera the “filthy” tablecloth, while Space plucks something off the tablecloth, and says “The service is terrible.”

Taffer, who’s watching via surveillance camera says of the social media influencers, “They’re going to bury this place.” Tyme complains of “not feeling good” after having her Cosmo. She repeats her complaint to the manager/owner when she comes over to the table with Taffer. Tyme says: “I’m not feeling good from my drink. It was horrible.” See video below. New episodes of Bar Rescue air Sundays at 10 pm on Paramount Network.