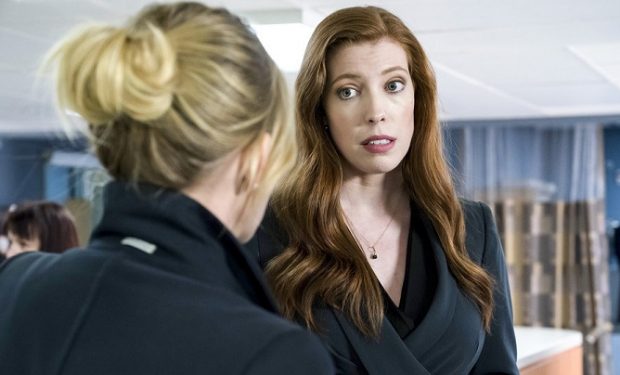 In the Law & Order: Special Victims Unit episode “Assumptions,” the SVU searches for two suspects spotted fleeing the scene after a Muslim woman, a city councilwoman, is assaulted inside a synagogue. Her chief of staff, Aida Galanis, meets Benson (Mariska Hargitay) at the hospital. The assault on the councilwoman isn’t the only case boggling Benson. She is not pleased to discover Rob Miller (Titus Welliver) is out on bail and has the nerve to intrude on her brunch with son Noah (Ryan Buggle).

Aida Galanis is portrayed by Elise Hudson. The redheaded Brown University graduate (M.F.A. in 2015) is best known for her role as Rachel in Spike Lee’s Netflix series She’s Gotta Have It and for her role as the librarian in the director’s 2018 Oscar winning film BlacKkKlansman. Law & Order: Special Victims Unit airs Thursdays at 10 pm on NBC, right after the new sitcom Abby’s.

Over the moon excited for @officialspikelee and the whole @blackkklansman team on their FOUR Golden Globe noms! ••• So honored to be a small part of such a legendary film, and so grateful to have been and continue to be directed by the man himself. ••• He speaks truth and does not back down. He makes art to reflect our world and ask the hard questions so that we may know ourselves and choose to grow. He’s an inspiration and also happens to be a really great boss. And I mean, look at that goober. Just the absolute best. •••