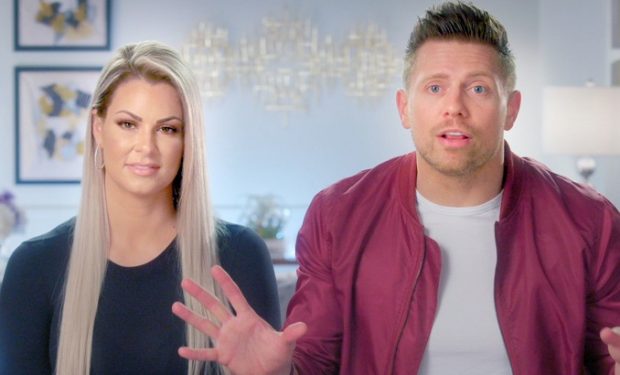 On the Miz & Mrs episode “Alone Time,” WWE champ Mike “The Miz” Mizanin has a conversation with his wife Maryse about their current sleeping arrangement. Their baby daughter Monroe sleeps in their bed, as do their two dogs. “I have to kinda squeeze in,” complains the 6’2″ 220-pound wrestler.

The Miz explains it’s not just the squeezing into the bed but that he has to do so quietly — because if he wakes the dog, the dog will bark and the baby will cry and his wife will be mad. “Then I will have ruined everything just trying to get into my bed to get some sleep.”

In the morning, The Miz suggests to his wife that they move Monroe into the crib which she hasn’t slept in — in the nursery which they spent a lot of money on. Maryse says, “If she’s in our bed or not, it doesn’t matter. A baby is a baby.” The Miz suggests putting in a camera in the nursery so if she cries they can go tend to her. All he wants is room in the bed and he tells his wife, “To be completely honest, you hog the bed. You’ve always hogged the bed.” Plus, the couple could use some more “alone time” together in bed.