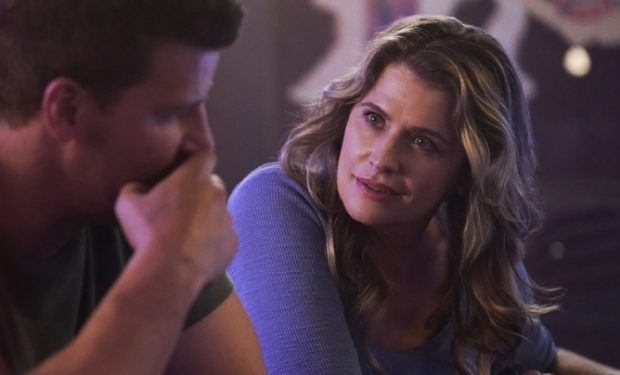 In the SEAL Team episode “Payback,” Bravo Team is out for revenge. They’re searching for the person responsible for the surprise bomb attack that left one of their own in danger. When not tracking down the terrorist, Jason Hayes (David Boreanaz) and the rest of the soldiers are reprimanded by Lieutenant Commander Eric Blackburn (Judd Lormand) after an “off campus dust up.”

Blackburn informs the men that General Shaw has arranged therapy sessions for each and every one of them. When they complain, Blackburn tells them to “suck it up.” The therapist just happens to be a gorgeous blond named Julia Logan.

[The cult classic with Paul Reubens and Donald Sutherland]

Therapist Julia Logan is portrayed by actress Kristy Swanson. She’s known for her roles in films including Dude, Where’s My Car? (Christie Boner), Buffy the Vampire Slayer (Buffy), Flowers in the Attic (Cathy), and Ferris Bueller’s Day Off (Simone), among others. SEAL Team airs Wednesdays at 10 pm on CBS.

Swanson with the late Luke Perry in Buffy the Vampire Slayer…

I abruptly woke at 4:30am thinking about you Luke & I couldn’t go back to sleep, then 5 hours later I hear you are gone. The tears won’t stop & they never ever will. You were that guy, that forever friend, we always had each others back & I will always remember you this way…

Boreanaz spoke about Swanson and their Buffy/Angel connection…