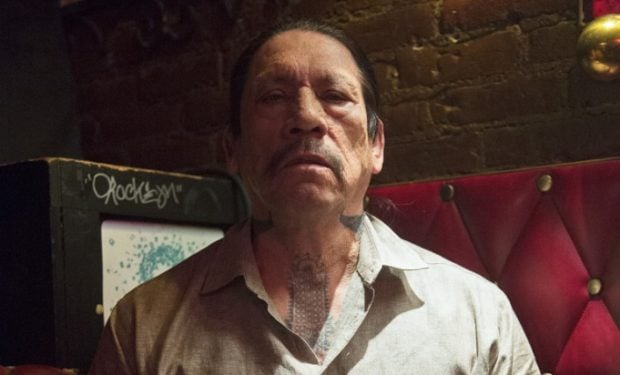 In the Blue Bloods episode “Common Enemies”, someone breaks into Luis Delgado’s (Lou Diamond Phillips) home and kills his wife Isabel. Luis and his former nemesis NYPD detective Danny Reagan (Donnie Wahlberg) team up to take down the vicious murderer who may also be responsible for Linda’s (Amy Carlson) death. After a conversation with psychic medium Maggie Gibson (Callie Thorn), Danny tracks down suspect Jose Rojas aka The Clam.

The Clam is portrayed by Danny Trejo. The former child drug addict and criminal (he was in and out of jail for 11 years for armed robbery and drug offenses), made his acting debut in the 1985 film Runaway Train with Jon Voight and Eric Roberts.

[Check out Trejo and De Niro in Machete]

Trejo is best known for his role as Machete in the Spy Kids movies, as Romeo Parada on Sons of Anarchy, and in films including Heat, Con Air, and Desperado. Blue Bloods airs Fridays at 10 pm on CBS, right after Hawaii Five-0. [NOTE: Stream any CBS show through CBS ALL-ACCESS.]

You have to take your shirt off in Brazil . . . #brazil #dannytrejo #machete

Trejo is also a foodie and entrepreneur…