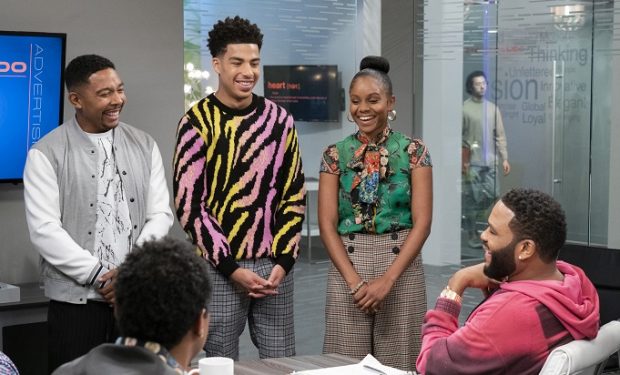 On the black-ish episode “Each One, Teach One,” Dre (Anthony Anderson) feels like he’s made a difference with the diversity at Stevens & Lido, the ad agency where he works and is head of the Urban Division. But when his son Junior (Marcus Scribner) tells him that Josh (Jeff Meacham) is his mentor, Dre flips out. Good thing Junior has the agency’s assistants Curtis (Allen Maldonado) and Zion to help him out.

Zion is portrayed by Geffri Maya. Maya is best known for her roles as Maya Bennett on ABC’s Private Practice (2007-2010 — see memorable scene in clip below). She’s currently starring in the comedy series WTF, Baron Davis with newly retired NBA All-Star Baron Davis. Fun fact: Maya made her acting debut in a 2008 episode of Everybody Hates Chris. black-ish airs Tuesdays at 9 pm on ABC, right before Splitting Up Together.

Flashback to the days where ya girl had that fresh press every week ✨ I felt inspired to share this because I been at this for a long time and i'm STILL PUSHING FORWARD. No doubt, being apart of this show was an amazing experience for me but only the beginning! So whoever needs to read this today… Keep going, glowing and growing through all that life throws at you. It's not only about where you've been but truly where you're going cause every seed that's planted in YOUR garden is for a reason. Be patient. Persevere 🌻 @shondarhimes @audramcdonald @tayediggsinsta @katewalsh