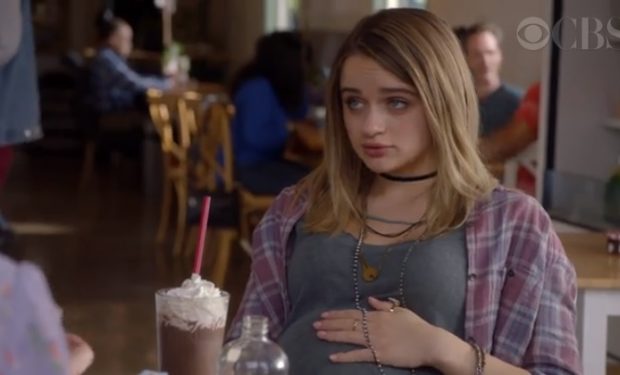 In the Life in Pieces Season 4 episode “Demo Nosebreath Surgery Match”, while Jen’s (Zoe Lister-Jones) pregnancy takes a toll on Greg (Colin Hanks), Colleen (Angelique Cabral) and Matt (Thomas Sadoski) meet Morgan, a pregnant 17-year-old who’s considering putting her child up for adoption. Desperate to adopt a baby, Matt and Colleen go to great and hilarious lengths to try to impress the rough-around-the-edges Morgan, who is also being wooed by another rich, swanky couple.

Everyone (including Morgan) is surprised to learn that her mother is getting back together with the father of Morgan’s baby. (You read that right.) Not surprisingly, Morgan is just tough and not particularly sensitive. At one point she turns to Colleen before going to the ladies room and says “being pregnant sucks. You’re lucky you can’t get pregnant.”

[Watch King with Selena Gomez in Ramona and Beezus]